Occasionally when syncing projects, a Merge Conflict will occur. A merge conflict is when the same file or group of files has been modified by multiple users. The Portal will try its best to resolve merge conflicts without your help, but this will often require user input.

Merge conflicts often occur when a user is attempting to sync their changes to a server project that already contains a file with the same name as a file in the local version trying to be synced with different content or file sizes.

When resolving Merge Conflicts the user is presented with two options.

Multiple assets can be resolved at once by selecting those assets using the check-boxes located next to the asset names, and choosing the option how they wish to resolve the conflict. 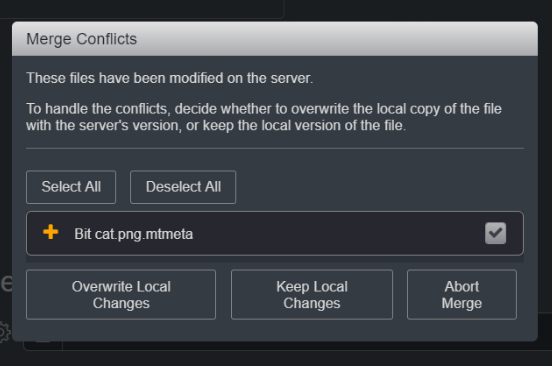 To better understand what leads to a merge conflict, and how to resolve it, we will consider a simple scenario. Lets say there is a project being shared between two people, John and Katie. When working together, John replaces an image used in a lesson with an updated version and names the file differently. Unbeknownst to John, Katie has changed the image as well and named the file differently, and has synced her new version to the online project.

In this case, When John attempts to sync, he will encounter a merge conflict. This was caused by the fact that the image was updated by multiple people. In order to resolve the merge conflict, John and Katie must talk about the conflict and decide which version of the image to accept, as only one can be used.